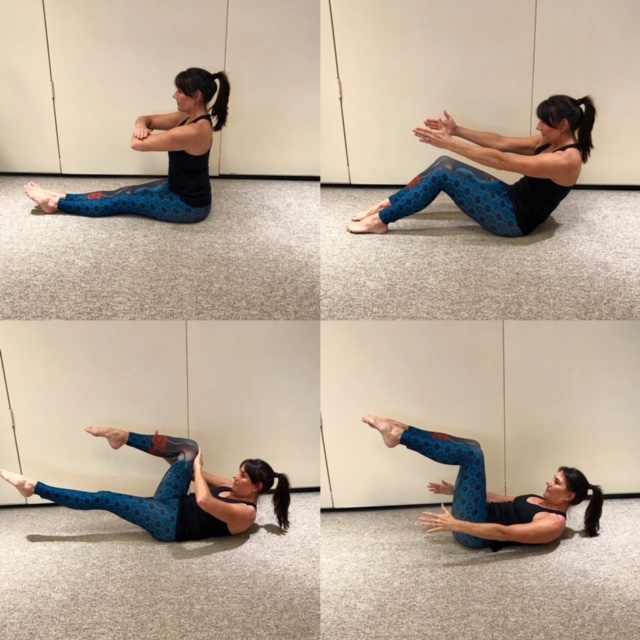 Can you identify from the exercises above which one is not using or shouldn't use the hip flexors?

If you thought that the hip flexors aren't or shouldn't be active in any of the exercises pictured, we need to talk.  I recently saw a short piece in a magazine regarding this very issue. The photo that accompanied it was an abdominal curl with the legs in table top. The piece was a Q and A in which someone asked, "sometimes I feel my hip flexors gripping when doing abdominal exercises, should I strengthen my abs to turn them off?"  The answer in the article was "yes" and I am really confused by this concept. Let me tell you why.  In every exercise pictured above the hip flexors are active, in some they are the primary movers.  Any Pilates exercises in which the whole trunk comes off the floor, (think roll-up, teaser) or the hips are flexed even a little (think teaser, 100's, single leg stretch, table top positions, roll over…) have a heavy hip flexor component.  When performing these movements, you can't, nor should you want to turn your hip flexors off.  The biomechanical action of the hip flexor group (several muscles that cross the hip joint) is to bring the femur closer to the trunk in a movement we call hip flexion.  None of the four abdominals cross the hip, under NO circumstance can they perform hip flexion ever. Not even a little. Not even when you cue them to do so.  If you are performing an exercise in which the thigh is flexed at the hip joint to either bring the thigh closer to the trunk or the trunk closer to the thigh, the hip is in flexion and the “hip flexors” are active. That is the simple biomechanics of the issue.  In the article it was mentioned that the hip flexors might also be weak.  Now this I agree with, the hip flexor group (especially the psoas major) are often weak and tight from sitting.  So, the "gripping' or over work that one might feel during ab exercises like the ones pictured is probably weakness in the hip flexors.  It isn't going to help to strengthen the abs, you need to strengthen the hip flexors.

Let’s look at a roll-up; a roll-up begins in a supine position with a neutral spine and hip.  As you curl your spine off the floor in the first part of the roll-up, the abdominal movers- external and internal obliques and rectus abdominis are flexing your thoracic spine at the spinal joints.  The abdominal group then performs lumbar flexion to posteriorly tilt the pelvis at the lumbar spine, however this is a small range of motion and cannot lift the whole spine off the floor. There comes a point at which you must curl your entire spine up off the floor, we often refer to it as the sticking point or the transition.  This is the point at which your hip flexors fire to lift the entire lever of your spine off the floor.  Now you may think that your abdominals curled you all the way up, but this is biomechanically, anatomically and physiologically impossible.  Your abdominals do not cross your hip, they will stop participating as the primary mover at the end range of the posterior tilt of the pelvis.  At the point in which your lumbar spine leaves the mat the hip flexors now get their time center stage.   These powerful muscles, which attach on the front of the pelvis or in the psoas major's case the lumbar and thoracic spine grab the lever arm of your pelvis and spine to pull you up.  Now, I will concede that one might be weak in abdominals, weak in hip flexors or out of balance in these two groups (one stronger than the other). I will concede that when a muscle group is working hard to perform its biomechanical action, one might feel gripping, cramping, fatigue or a myriad of other sensations.  But I cannot, nor should you, as an educated Pilates Instructor ever agree that when performing exercises with the hip flexed and feet even a little off the floor, that the hip flexor is not performing this action.